We want to empower workplace mental health so will keep up updated with the latest free webinars & articles to support you.

Today (31 March) is Trans day of Visibility – a day for trans people to just ‘be’ – to be living our lives, showing our humanity, our strengths, our weaknesses, our hopes, our fears and to show that we are people – just like you.

I have been ‘out’ for just 18 months, but taking stock of my own journey over the last year – since the last TDoV, so much has happened – and in some ways so little.

You may not have noticed, but things are getting worse for Trans people in the UK and in many other parts of the world.  Misinformation, abuse and legal efforts to curtail the public life of Trans people have ramped up during lockdown, and made an already dreadful situation for everyone a sometimes intolerable one for those in the Trans community, who often face familial rejection and stigma at work, and so rely on support networks which in many cases ceased operation or had to go online.

Last week I had the privilege of taking a course with Mental Health First Aid England, to better support my team at work with their mental health and we discussed something called the ‘stress container’

I always used to call this my ‘plate’ – as in, ‘I sometimes have too much on my plate’ – but the container model makes it much clearer to explain. 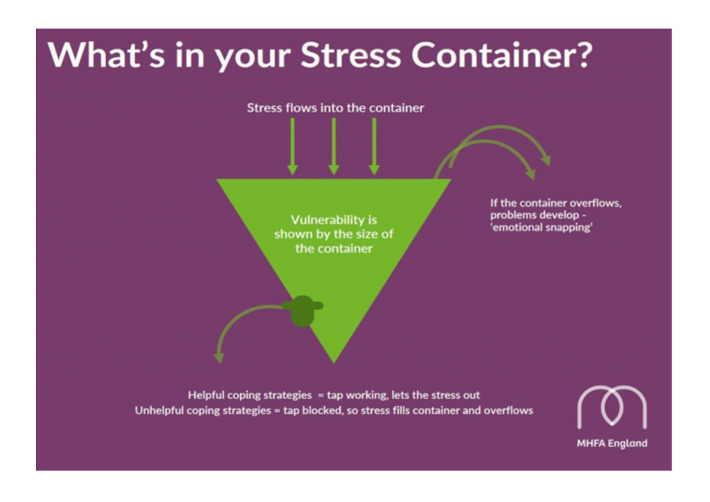 As an exercise we wrote down what is in our stress container, and I took quite a long time to complete this, and when I reviewed it, the majority of my stressors stemmed from being Trans – well, not being Trans, because I just ‘am’ – but more the dealing with issues thrown up by society in reaction to my being trans and existing and living in our society.  I also pondered my situation before coming out, and being open with the world about who I am – in those days, the secret of being trans and closeted was a major blocker to developing coping strategies, so the ‘tap’ could never properly open.  There are thousands of people living like this today, and their pain stems largely from the fear of reaction to their living their lives openly.

A major factor in the health of people in the broader LGBTQ+ community – and especially in the Trans community is the strain of living a double life, of not seeing others around who are like them – not even role models per se, but just ordinary folk being themselves in the public eye.

So I take a view now that Trans visibility matters more than ever, that for those people struggling with the fear of living their lives authentically that seeing other Trans people doing that, thriving, addressing their stress containers, showing the amazing things we do every day.

If you are reading this as a cisgender person (not trans!) – then please, think about how you can contribute to making life safer, more ordinary and easier for trans people to exist.  If you are Trans, either out, or in the closet, then look around you on this TDoV and see that you are not alone – there’s a world out here and it’s for us as well.

I’m Emily, I am a Trans Woman, I am a mental health ambassador and I am visible.

This Can Happen Friends

Interested in becoming a This Can Happen Friend? Find out more about our 12 month rolling programme to support employee mental health strategies within your workplace.

This Can Happen was extremely well planned and executed, with a diverse and informative range of topics. The choice of speakers was excellent, bringing relevance and honesty to the subject matter. The conference demonstrated what other companies are doing to help employees and left us with many ideas about how we can accelerate our own strategy. We cannot wait until the 2020 conference.